S P C E.com Channel 6:12:00 AM 0 Comments
S P C E.com - Samsung officially announced their two newest flagship phone, the Galaxy S6 Edge + and Galaxy Note 5 in New York, United States, Thursday (08/13/2015). Samsung CEO JK Shin said they were proud with the success of the series Note that initially considered strange because it appears when the phone with a 3.5 inch screen size is very popular. However, history proves, series Note managed to bring in a new category of handheld computers called "Phablet", a combination of a smartphone and a tablet. And more importantly, consumers love it, so that emulated the concept phablet now almost all manufacturers, including Apple's iPhone series 6. 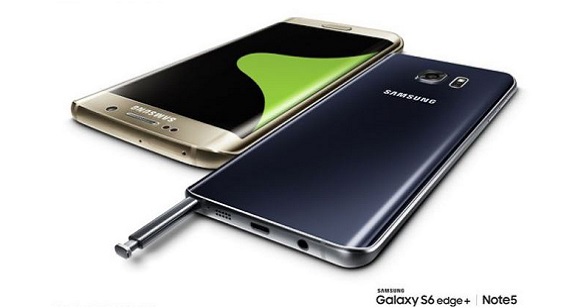 Samsung offers a number of new things on the Galaxy Note 5, including design, performance, camera and battery. In terms of design, the Samsung Galaxy S6 combines the Galaxy Note and Galaxy Note 5 4. Body wrapped in glass at the front and metal on the back. This signaled the end of the era of the battery can be removed and the microSD slot on the Samsung flagship product. The screen size of 5.7 inches, the same as the Note 3 and Note 4, equipped with Super AMOLED technology and quad-HD resolution.

In terms of performance, Note 5 has been using octa-core Exynos processor as the Galaxy S6 and 4GB of RAM. Samsung Galaxy Note 5 is available in 32GB and 64GB storage versions. To support the performance, Samsung pinning battery capacity 3.000mAh which of course is equipped with technology "fast charging". You can recharge the battery wirelessly.

The main camera is still the same as the Galaxy S6 with 16MP resolution and 5MP front camera with an aperture of f / 1.9 is equipped with Optical Image Stabilization. Interestingly, the camera was able to broadcast your recordings directly to YouTube. Samsung Galaxy Note S Pen 5 also promises better than ever when you use it to write or draw.
Galaxy Note 5 running operating system Android 5.1 Lollipop is wrapped with WouchWiz interface. Samsung device users must be familiar with this view because adorn almost all Android Samsung products.

Turning to the Samsung Galaxy S6 Edge +, the phone is actually very similar to Note 5 except, of course, the S Pen. He also uses a 5.7-inch super AMOLED screen HD quad with 518ppi image sharpness. Likewise, the processor, front camera and rear camera, RAM and battery. The most striking difference between the two is, the body is curved like the Galaxy S6 + S6 Edge Galaxy series. Compared Galaxy S6 Edge, Edge + series is also very similar, except the thickness of the body (6,9mm versus 7mm) and a slightly larger screen.

So first I can on this occasion Shere samsung re-release of their new product Galaxy S6 Edge and Galaxy Note 5 of this article may be useful for you and for everyone. Wait for the next article more interesting, remained in S P C E.com
Baca Artikel Berikutnya
Mengubah TV biasa menjadi TV layar sentuh, Dengan Touchjet Wave >>
Tags
Gadget Review
Related Article