S P C E.com : Hallo Peace be upon you, and Allah mercy and blessings saifulcomelektronik.com faithful readers, this occasion I will try to share to you all wherever located. I'm going to (sharing) this time is how Modification receiver parabola into 87.5 FM transmitter. actual previous article on this subject I've posted. But my back revisions. using a frequency of 108 Mhz and now before I change it to 87.5 Mhz. 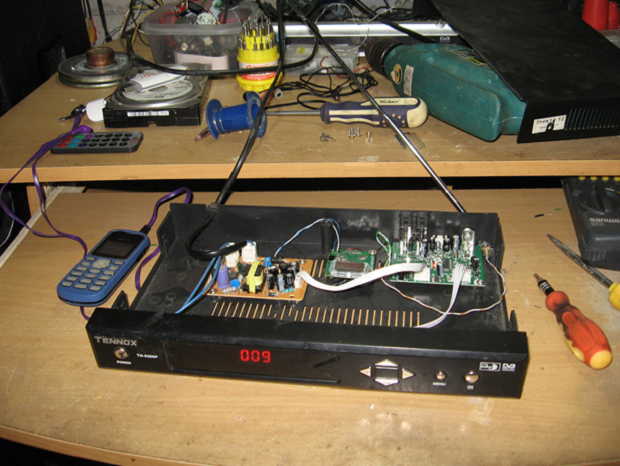 In modifying the digital receiver dish is actually quite simple and easy, just adding a FM modulator into a digital satellite dish receiver.

FM modulator tool that I use in regular parabolic digital receiver such as images, is a MINI modulator which is usually used in a car, which functioned as a media player MP3 files.

If a multimedia device (type conventional) in the vehicle does not support the MP3 media player, but it supports a radio receiver, then this modulator tools that will be made as auxiliary media player MP3nya, via FM radio frequency waves.

Then, the frequency waves emitted from the modulator mini, received by conventional on the car radio (radio receiver).

The surplus - after he finished in a modified digital receivers parabola this unusual (such as images), we can listen to the sound in the distance about - about the distance is approximately ± 10 meters, from digital satellite dish itself, and not only that, the excess one another, do not bother people around us, what if we want listen a loud voice,

How modifications and components as well as tools that be required

The components required to modify this parabolic digital receiver into an FM transmitter are as follows :
The difficulty lies in modifying the FM modulator, that, in order to input the input voice (audio) of digital satellite dish that can emit sound modulator of digital parabola by up to 87.5 FM frequency bands 108 MHz.

To find out how please see the video below, from beginning to end, congratulations and hopefully watch the video can be understood and useful for you.

Up here before I can sharing on this occasion, about a satellite dish receiver Modification 87.5 FM transmitter may be useful for you and beneficial also for everyone. Stay tuned for my next article also more interesting only in www.saifulcomelektronik.com